Safety concern in an autonomous vehicles (AV) primarily arises from the software pipeline which has successfully replaced the human driver, who earlier acted as an integrator and operator of various driving tasks. AV need to perform multiple highly dynamic and complex tasks for which they should be able to generalise any unpredictable situation and this process primarily depends on its software pipeline.

With many prototypes of AV being tested on road[1], the concern for the safety of both human life and the infrastructure has become a pivotal area of research. This safety concern primarily arises from the software pipeline which has successfully replaced the human driver, who earlier acted as an integrator and operator of various driving tasks. AV need to perform multiple highly dynamic and complex tasks for which they should be able to generalise any unpredictable situation and this process primarily depends on its software pipeline.

Although there has been a great amount of improvement in the hardware and sensor technology, the software pipeline remains the biggest barrier in the safety and adoption of AV. Further, the new paradigms like end-to-end learning, as done by Mariusz et al. at Nvidia[2], where a Convolution Neural Network (CNN) is fed with raw camera images to produce steering angle as outputs. This end-to-end learning architecture raises new questions regarding the safety, reliability and human interpretation of the output results which need to be addressed. Another popular approach is a hierarchical software pipeline comprising techniques of localisation, perception, and planning and control, all done separately. The information flow in the software pipeline of an AV consists of the input from raw sensors which is processed for object detection and localisations and then passed down the stream for planning and control. Many of these techniques are based on Machine Learning (ML) and therefore, they are primarily data-dependent.

As ML functions can learn from data rather than being explicitly programmed, they are intrinsically uncertain. Many of the state of art ML techniques can be argued to have non-deterministic learning process, Neural Networks (NN), for example, has a non-deterministic learning process owing to their random initialisation of parameters (weights and biases) and stochastic optimisation technique for loss reduction. Such ML techniques have a very high generalisability; however, this ability makes prediction non-deterministic for inputs belonging to the same set of class. The non-deterministic nature of ML makes their output highly uncertain. From the safety perspective, work done by Lydia et al. [3]argues that these internal uncertainties and non-deterministic nature of ML, as discussed above, lead to a deviation from the intended functionality of ML dependent system and is called functional insufficiencies of such systems. This precisely makes the software pipeline a safety issue.

Due to the increasing dependencies of these tasks on ML, the uncertainty of predictions propagating downstream along with the lack of interpretability of these uncertainties, makes it very challenging for the system to identify and respond to any software failure. Hence, to establish an acceptable level of safety in AV, we need to argue that ML in the software pipeline is acceptably safe.

From the above discussion we have a research hypothesis, which is:

It is possible to provide a compelling assurance argument for the safety of decision making in AV in the presence of uncertainty.

Above research hypothesis can be further divided into the following research questions:

In the next part of this blog, we will discuss various software architectures in detail. We will also discuss the challenges and limitation posed by uncertainty in the decision-making process.

The processing tasks for humans from left to right can be considered analogous to the ability of AV to generalise unseen or difficult tasks. Therefore, we can clearly observe that as we move more towards a higher level of autonomy in AV, as given in SAEJ3016, the dependency and complexity of the Machine Learning (ML) techniques also increase correspondingly. 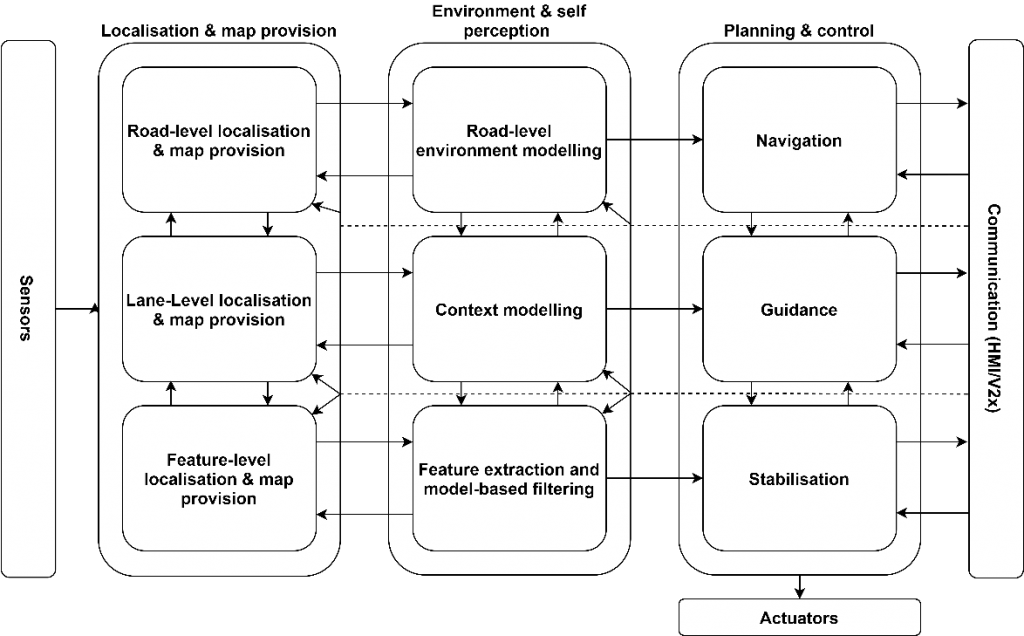 Based on the hierarchical driving tasks discussed in the previous section, the Functional System Architecture depicted above is divided vertically into three abstraction layers. The inputs to the Planning and Control block of the pipeline comes from the Localisation and the Perception blocks. The input and output from each of the sub-blocks represent the driving task hierarchy.

The functional system architecture can be broken down into five main groups as below:

In AV, sensors are the primary source of information about the external and internal state of the ego vehicle. These sensors are categorised under three categories as mentioned below:

These sensors provide input to the Localisation & Map Provision and the Environment & Self-Perception blocks. These blocks in turn process the sensor data to generate the output required for the respective hierarchies of Planning and Control.

The primary tasks of this block are to maintain an up-to-date copy of a priori map by taking information from localisation sensors like GNSS and keeping it updated using the newly perceived image from the Environment & Self-Perception block. The upward facing arrows depict that the Localisation & Map Provision block subsumes information from the lower levels to detect, for example, the presence in a lane. Also, it helps to build the road topology from the detected and updated map features obtained from the Environment & Self-Perception block. Similarly, the downward facing arrows represent how information from higher levels, for example, the existence of a road in a priori map, can be used to establish a semantic relationship between the features detected at the lower levels.

Below are the tasks associated with Localisation & Map Provision:

The final step in a software pipeline is Planning and Control and this can be viewed as an integrator of the previous blocks. The different levels of hierarchy in driving tasks are clearly replicated here.

The communication block interacts with all the blocks of the software pipeline. It communicates with other vehicles/communication infrastructure (like a remote operator, etc.) and with humans. Interaction with humans is usually at the top levels of the Planning & Control block, however, as the interaction also depends on the SAE level of automation, human interaction might be limited in the future. For example, at SAE level 5 of automation, human input may be only required to provide the driving mission goals, but at SAE level 3 of automation, the human input, in the form of taking over complete control, will be required in case of an adversary, i.e., an interaction at a lower level.

The V2X communication provides supplementary information which can further improve the overall accuracy of the AV. This, however, can be limited in application due to the data sharing laws of specific regions.

About the Author: Vibhu Gautam 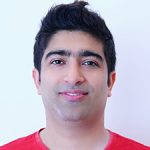