In the previous blog, we covered IOLW – the technology that can break the ice in wireless technology in the agricultural sector by providing its reliable star-topology network working in the 2.4 GHz ISM band. However, it is not the solely available technology. This blog will introduce a meshed technology, namely SmartMesh IP.

SmartMesh IP is indeed a meshed technology based on IEEE 802.15.4 that enables the participants of the network to be bridges or access points towards the Master. This is a key difference between IOLW and SmartMesh IP. The topology of SmartMesh IP is represented in Fig. 1. It can be seen that SmartMesh IP has a distinct manager that, first, multicasts a search request to the neighbouring nodes (sometimes called “motes” in literature due to the Dust developer) and then forms the network. Every node in the network acts as an access point. Thus, similar to what has the Master done in the beginning, the nodes do the same – they send advertisement packets enabling a joining node to synchronise, join and integrate into the network. Then the newly joined node performs the same and so on until the capacity of the network is fulfilled, though developers do not recommend having a hop depth (a number of intermediary devices on the way to the Manager) of more than eight. SmartMesh IP size is limited by the Manager. It can be either 100 or 1000 modes for the Embedded Manager (EManager) or the server-class Manager (VManager). For simplicity, there will be no separation between Managers and therefore the term “Manager” will be used. 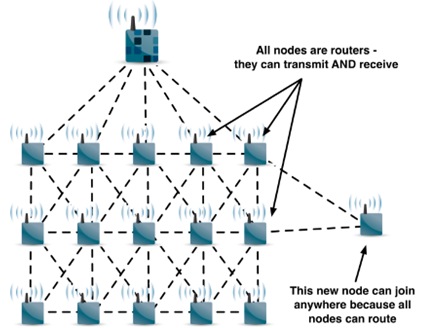 When the first modes connect to the Manager, the communication starts. SmartMesh IP exploits the time-slotted channel hopping (TSCH) technique in which the communication time is split into time slots helping to overcome the intersymbol interference (ISI) by minimising the packet collision. Due to the meshed network, the communication is strengthened since the network is made in such a way that every node has at least one parent. This allows having multiple paths on the way to the Manager to send the information. Combined with retransmissions, which are infinite for upstream packets until acknowledged, this makes SmartMesh IP a robust protocol despite the fact that SmartMesh IP packets are UDP packets each of which is 90 bytes long. On top of that, channel blacklisting is incorporated making SmartMesh IP even more robust.

To keep track of the meshed network, the Manager is responsible for collecting and managing “health” reports. These reports are sent from every node in the network and contain information about nodes’ parameters like power consumption, path stability, allocated bandwidth, number of parents or the received signal strength indication. By default, four health reports per hour are sent by every node in the network. Based on the information from these reports, the Manager is constantly working on improving the network, power consumption and latency.

SmartMesh IP supports the “Blink” mode feature that allows it to send upstream data without even joining the network. It is done for sensors that are highly dependent on latency. Each node’s bandwidth is split between downstream, upstream and shared bandwidth. Shared bandwidth allows the Blink mode to send the information without waiting for its queue in the TSCH framework. Despite its advantages, the Blink mode can consume a lot of energy during the search for advertisements from other nodes. That is why it is very important to set devices that will work (send information) no more than once per day. For example, it can be a sensor signalling the damage or critical state of a machine.

SmartMesh IP exploits the on-chip application protocol (OAP). Using this protocol one may interact with the nodes in the network by sending/receiving requests. While OAP is the basis, SmartMesh IP has been evolving in different directions. That is why there are a number of applications that are available to the end user using OAP. For example, a beginner can have an overview of the SmartMesh topology using the StarGazer GUI (see Fig. 2). Another user may interact with devices using command line interface (CLI) commands or it is possible to launch the SmartMesh software development kit’s (SDK) GUI (see Fig. 3) that already has a set of built-in commands. For the more experienced user, a Python library can help. Even more advanced users can combine the Python library for the Manager with programming nodes to perform specific actions upon booting. 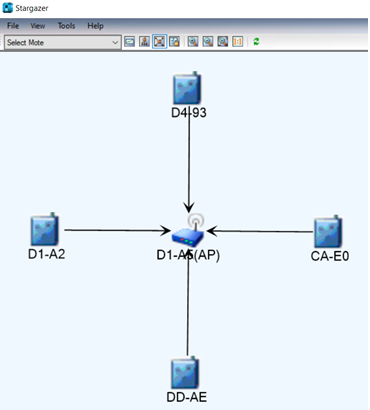 Figure 2 StarGazer’s representation of the network 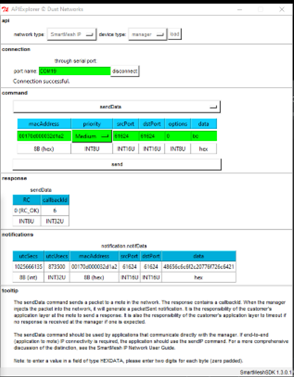 SmartMesh IP opens a huge variety of options suitable for factory automation, most of which are also applicable to the agricultural sector. The network’s capabilities are similar to the star topology of IOLW whereas the meshed network may add more freedom to the sensors’ positioning. How will both IOLW and SmartMesh IP show themselves during actual tests arranged in a way that will simulate the agricultural electromagnetic environment? This question will be investigated in the next blog.

All the material that was used in this blog, can be found on the official website of Analog devices. 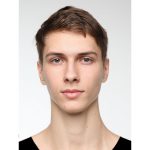