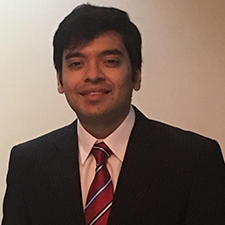 Hassan Tirmizi completed his Bachelor’s in Electrical engineering from Pakistan in 2015 specializing in Electrical Power Systems and Renewable energy. He subsequently joined the joint EU funded Masters program in Sustainable Transportation of Energy and Electrical Power Systems (EMMC STEPS) as an Erasmus Mundus Scholar and spent a semester each at the University of Nottingham(UK), University of Oviedo(Spain), and the Politechnical Institute of Coimbra (Portugal). Since 2019 he is working as an Early Stage Researcher on the Marie Curie Horizon 2020 European Training Network on Safer Autonomous Systems at KU Leuven, Bruges Campus.

His research interests include modeling and analysis of high-performance electrical machines, power electronic converter designs, and renewable energy systems. As part of the MSCA SAS Project, he is currently investigating the electromagnetic compatibility (EMC) of safety-critical autonomous systems at the subsystem as well as the component level. Due to his solid background in computer-based simulations and a penchant for extensive mathematical analysis, he’s currently pursuing a model-based analysis for the robustness of autonomous systems against electromagnetic interference. The ultimate goal of his doctoral research is to bridge the gap between EMC and functional safety by incorporating fault-resilience into the functional performance of autonomous systems.