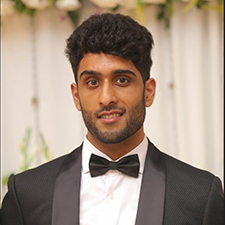 Zaid Tahir is an Early Stage Researcher for the MSCA ETN-SAS project. He will do research and development for testing methodologies and prototype tools for simulated-situation testing of autonomous cars in an urban road environment, using a concept of situation coverage to guide the testing.

Zaid did his bachelor’s in Avionics Engineering from the National University of Sciences and Technology (NUST) Pakistan in 2015. During his bachelor’s, he worked on many projects relating to robotics, especially those that involved autonomous vehicles and unmanned aerial vehicles. This passion in robotics led him to enroll and complete a master’s degree in Robotics and Intelligent Machine Engineering from NUST Pakistan in 2018. Zaid did a technical job in an engineering firm for three years while doing his masters. As soon as his masters was completed, his dedication and devotion to robotics pulled him in applying for a PhD that was specifically related to autonomous vehicles which had been his passion all along and oddly enough, currently, he is handling the testing of autonomous cars as ESR7 in the MSCA ETN-SAS project.